The portrait factory of the master from Delft

Last Saturday I visited the Portrait Factory of Van Mierevelt exhibition at the Prinsenhof museum in the city of Delft. Although Van Mierevelt (1566-1641) was probably one of the most successful painters of his age, he is relatively unknown today. He mainly did portraits and he soon gained a respectable reputation with his portraits of Dutch Royalties. Soon followed by portraits of Dutch politicians, scientists and poets, which gave him even more fame and wealth.

What struck me was the mercantilism by which he treated portraiture. The factory fashion he used to literally turn out hundreds and hundreds of portraits (hence the title of the exhibition) and the numerous assistants he used. He even used a pricelist where people could order breast pieces (new or copies) or knee pieces (new or copies) in his shop (“winckel”) at standard rates. So, clearly, painting was doing business for Van Mierevelt. A way to make money, and the more, the better. He left 133.000 guilders when he died in 1641. This was a very huge fortune, given an average craftsman earned about 200 to 300 guilders a year. Many people see Henry Ford as the inventor of the assembly line, but with a bit of imiganation (and exaggeration) you might argue if Van Mierevelt beat him to it.

To meet the high demand, Van Mierevelt used a very efficient technique to produce high volumes of portraits. One of the things he used, were templates. He made a template of the main characteristics of a person’s face and used this to make copies and also to make “new” portraits of that same person over time. Below you see part of the portrait of Prince Maurice as painted by Van Mierevelt in 1607 on the left. Next to it you see him as painted in 1625. You would expect Prince Maurice would have posed a second time. Wrong! Van Mierevelt used a template (an imaginary sample is shown on the right) to get the characteristics of his face and just aged it a bit. If you like, a 17th century version of Photoshop! 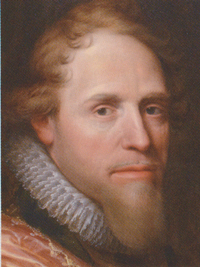 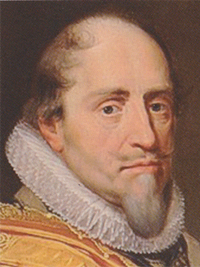 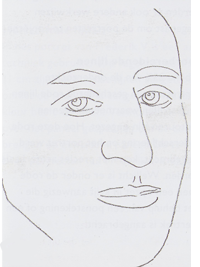 There was a small reconstruction at the exhibition demonstrating how this technique actually worked. Van Mierevelt did all his portraits on wooden panels. After preparing the wood, he presumably used his template, which basically were lines of small holes through which he punched the pigment. This left a series of small dots on the wooden panel. The first image below shows this. Next, he connected the dots showing the contours of the face and gave a sort of sketched drawing. This remained the same throughout the years for one person. From there on he could paint the rest giving it the resemblance it needed without the need for the person to actually pose again. 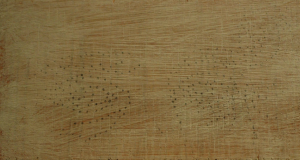 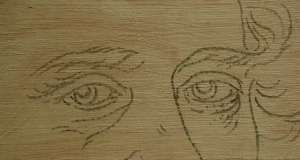 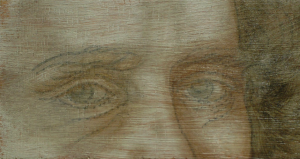 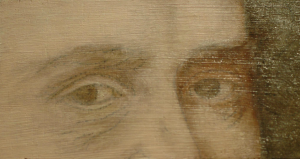 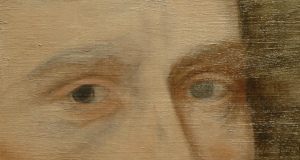 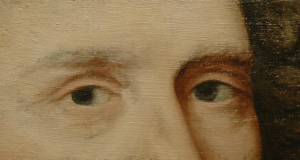 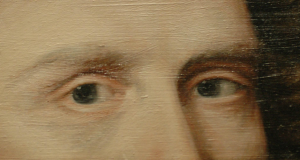 I’m not saying Van Mierevelt was a kind of 17th century Bob Ross. He was a very skilled painter, who just happened to find an immensely efficient way of producing portraits that were in high demand in those days. It made Van Mierevelt a very wealthy man. It’s interesting to see, though, that many centuries later, his name has almost gone forgotten, whilst painters like Rembrandt, who had to struggle to survive during their lives, are now regarded as extra-terestial and whose work is invaluable today.

Of course, the question remains why such a largely popular and successful painter during his lifetime faded into oblivion today. To a large extent, I think, it has to do with his critics. His work was generally characterized as dull and boring. Not in its technique, but in the message it communicated. In the Criticizing Photographs course I’m following right now, there is a phase dedicated to this topic: Interpretation – what does the image tell you; what message did photographer try to communicate. In all honesty, Van Mierevelt’s portraits are not particularly strong in this area. They’re very accurate images of real life people. Nothing more, nothing less. All are more or less in the same pose. All are factual representations of reality. No to little attention has been given to their character, emotion, expression, etc. If you compare this with the work of Rembrandt, Vermeer, Hals and others – not just because of their excellent technique, but also because the strong message they communicate – you can understand why over time these painters are regarded as true Masters and the name of Van Mierevelt is hardly ever mentioned.