You might wonder what such a title is doing on a photography blog. I’ll come to that in a minute.

My previous post contained a videoclip. In it Hans Aarsman explained that one of the reasons he’s still taking photographs – after quitting professional photography many years ago – was to keep memory of certain objects that he could then, subsequentially, throw away. This post is about getting rid of things. I have been using Apple’s personal equipment – iPods, iPads, iPhones and the like – for many, many years. I still have one of the first iPods they ever released. The ones with the monochrome display and jog dial. Believe it or not, it still works. I’m not the only one here at home who’s using Apple’s stuff. My wife and kids as well. One big happy Apple family.

Two years ago exactly I bought an iPhone 4s. Not for photography reasons, but simply for ordinary phone calls and sending text messages mainly. Over the years I started to use it as a remote control device for my sound system at home. And also for streaming music and video with apps like Spotify and Netflix. For the latter purposes (text messaging as well) wi-fi is in fact a pre-requisite. If you want to control your costs a little bit, that is. But since most people do, wi-fi operation is mandatory. This all worked fine until about a month ago. Now the iPhone 4s seems to be notorious for its wi-fi problems. I wasn’t aware of this, but am now. Have a look at the internet and you’ll be amazed by the number of hits you’ll find. I literally tried every possible remedy. Restored factory settings, no luck. The hair dryer/fridge trick, no luck. Had the wi-fi chip replaced by a certified local repair centre, no luck. Went to the nearby Apple store. They confirmed the issue to be a factory fault and offered me an iPhone 4s replacement. It would only set me back € 200! The other option they offered was an iPhone 5s replacement for which I had to pay € 350 and take a subscription for at least 1 year with one of their providers. I already have a subscription that I’m happy with. But these were the only 2 options I was being offered. Period. I could take it or leave it. I decided to do the latter.

Once outside I felt so extremely upset and insulted that I needed to think things over during dinner downtown. It didn’t help, really. My frustration grew worse. Why should I pay for a fix to a problem that I didn’t create? They admitted it themselves in the Apple store: it’s a known 4s factory issue. So, over a chicken tikka masala (more than fantastic, by the way) I decided it was time to say goodbye to Apple once and for all.

Finally we’re getting to the link to photography. Ever since I watched Hans Aarsman’s theatre show and read his book, I’ve had it with aesthetic photography, like him. I’m getting more and more convinced it’s the content that counts and not the form. I haven’t touched my DSLR for the last 2 months or so. In a proper Hans Aarsman tradition here’s a picture of my iPhone 4s before throwing it away. It served me well for 2 years, but fortunately I don’t have any emotional connection to a commodity device. Bye, bye iPhone. Bye, bye Apple. 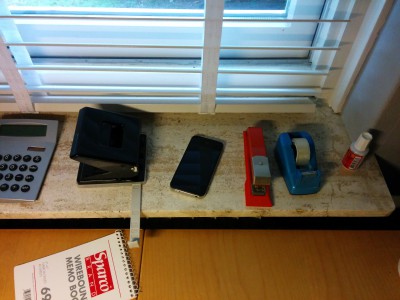 For those who are wondering what I did next: I bought a Google Nexus 5 that same evening. After all, isn’t Google the next major photography software player out there? It’s a fine phone, by the way.