Attended Hans Aarsman’s theatreshow “The Aarsman Projection” the other day. Hans Aarsman is a former photo journalist who used to work for Dutch newspapers and published several books. But as of late he’s not a professional photographer anymore, but dedicated his career to photo analysis instead. He has several columns on the internet and one of the national newspapers where he analyses a particular photo in his own, characterizing style. Beauty, in a traditional sense as we, photographers, tend to interpret photographs, is not Aarsman’s angle. So, instead of using elements such as composition, use of colours and light, perspective, et cetera, he looks for details and questions their significance. With almost all images he analyses, he uses the internet to further research the details and often discovers all kinds cross-links with other images or photographers. In this respects, the term photodetective is very to-the-point.

This quote, appropriately from Sir Arthur Conan Doyle’s worldfamous main character, is the leading theme for Aarsman’s show. Watson – Sherlock’s assistant, for those unfamiliar with the characters – once asked Holmes: “How do you do it? You see the same things at the crime scene as I do. Still, you’re able to draw the right conclusions every time.” Holmes’ reply: “How many steps does our staircase at 221b Baker Street have? We both have taken hundreds of times, but I know it has 17 steps and you don’t. That’s the difference.” Basically this is what Hans Aarsman does in his photo analysis. He leaves beauty out of the equation. He finds aesthetical beauty boring and rather feels that people, who strive for this kind of beauty in their work, confine themselves to all kinds of rules that apply. Therefore, in his opinion, this kind of photography is not (or less) authentic. Aarsman approaches the image, or series of images, as a true private investigator. He has a keen eye for detail and does a lot of research (on the internet most of the time). Below is a link to video clip from a performance he did at one of the TEDx conferences (it’s not a clip from the theatre show). Here he explains why he stopped working as a professional photographer and is now full-time focused on photo analysis.

If you’re interested to read more of his philosophy on photography and his approach of the analysis, I recommend this book (Dutch only, I’m afraid). And, of course, I recommend a visit to one of his theatre shows or other performances. It certainly gave me a very interesting and enjoyable evening. 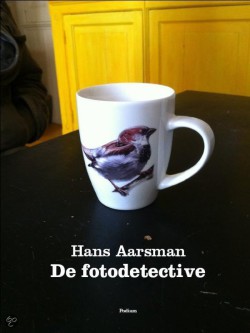