The holiday season and a tight work schedule have prevented me from updating this blog over the last few weeks. Doesn’t mean though that I haven’t done anything about photography. Time to do some catching up and tell you what I have been doing.

Probably the biggest surprise in the world of photo editing yesterday! No rumours, nobody expected or predicted this. Is it good or is it bad? As long as we don’t know what Google’s plans are, it is hard to say really. Given that they already serve the pro/consumer market with Picasa, Snapseed seems a logical choice for the take-over. But the widely recognized and awarded plugins (Color Efex Pro, Silver Efex Pro, Viveza, etc), NIK Software also has a very strong offering for (semi) professionals. Personally, I use Color Efex Pro for all the post-processing I do.  So what are Google’s plans with this suite of products? Are they going to continue with the development? If so, isn’t it a bit out of their league? Picasa and Snapseed I can understand, but you would expect the other products to belong to a company like Adobe, right? I can’t wait to hear what Google has to say about this. Another interesting question, of course, is what this all means to Capture NX2? Originally developed by NIK Software, but some years ago handed over to Nikon for further development and maintenance. As we all know, it has been quiet since. Some people believe that the future of Capture NX2 is much brighter than before. I really doubt if this is the case. The product is aimed at photo professionals and high-end amateurs. Although Google takes photography seriously, this is a totally new area for them. I don’t expect Google to be involved in anything like Capture NX2 or any other further development of NX2 for that matter. So it’s still up to Nikon themselves of which we know they make very fine camera’s….

Every year the World Press photo collection is exhibited close to where I live. Obviously, every year I visit it. And every year it makes me feel awful. It’s more than one person can handle in 2 hours. So much violance, so much aggression, so much pollution. So much negative things. Even when you go and see the sports section, it’s full of aggression. I deepley respect all photo journalists who risk their lives day in and day out in order to record they ways we behave. But it does paint a one-sided picture. I still recall very vividly, several weeks after visiting the exhibition, of the violence in Mexico with its images of chopped off heads and limbs scattered across the streets. It makes you feel sick. And every year I say to myself this was the last visit. And every year I go again. Probably hoping, against all odds, that next year our world has turned into a much nicer place to live in.

Finally, I did take some pictures myself. That’s, after all, what it’s all about. You can talk about editing software as much as you like or visit as much exhibitions as you can, but at the end of the day it all comes down to taking pictures yourself. In general, I like taking studio portraits. Taking portraits of kids can be a challenge. I had this experience once before when taking kids portraits for the first time. This time the kids – a boy and a girl – were older, 5 and 7 years old to be exact. The girl is taking ballet lessons, which you can tell by the way she poses.

The boy was very extrovert and busy. Couldn’t sit still for one single second. So there was no way to direct the kid. I decided the best way was probably to let it go. Let it happen and take as many shots as I could. To illustrate this: the boy found a basketball laying in the studio somewhere and immediately started playing with it. Instead of telling him not to do so (I admit I was worried he would ruin my strobes a number of times…) I just let him go. I didn’t plan to take any shots of him with the basketball, it was just something that happened. It resulted in some decent shots, I think. So in the end, parents happy, kids happy, and me happy. Was fun to do. Anyway, as always, judge for yourself. 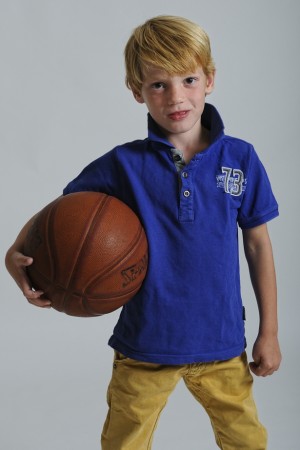 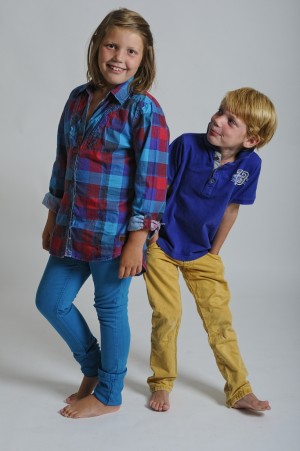